Let’s take a look at all the ways Anamu Herbal Tea can boost your wellness.

According to a study published in the Journal of Ethnopharmacology in 2012, Anamu was found to relieve Anxiety, lessen Depression and enhance memory.  Here is the overview, Petiveria alliacea (Phytolaccaceae) is a perennial shrub indigenous to the Amazon Rainforest and tropical areas of Central and South America, the Caribbean, and sub-Saharan Africa. In folk medicine, Petiveria alliacea has a broad range of therapeutic properties; however, it is also associated with toxic effects.  The aim of this study evaluated the putative effects of Petiveria alliacea on the central nervous system, including locomotor activity, anxiety, depression-like behavior, and memory, and oxidative stress.

Anamu has been studied for several years and it has been noted to be effective in slowing or stopping the growth of infections especially in the liver, brain, and blood. It has also shown to be effective in those with long term wellness issues.  In a University plant-screening program, Anamu was one of 34 plants identified with active properties against numerous popular modern-day diseases and illnesses. Dibenzyl trisulfide was one of two of the active compounds in Anamu which can actively improve the feeling of wellness in patients. Anamu also contains the phytochemicals astilbin, benzaldehyde, and coumarin, all three of which have been documented with anti tumorous properties as well.  Here is information from research found from a scientific study by rain-tree.com – please note the included text has been abridged to meet local, state, and federal requirements to never mislead or misinform any potential purchaser of our tea.

ANAMU – Many biologically active compounds have been discovered in Anamu, including flavonoids, triterpenes, steroids, and sulfur compounds. Anamu contains a specific sulfur compound named dibenzyl trisulfide. In a University plant-screening program, Anamu was one of 34 plants identified with active wellness properties. The researchers reported that dibenzyl trisulfide was one of two of the active compounds in Anamu with wellness actions. Anamu also contains the phytochemicals astilbin, benzaldehyde, and coumarin, all three of which have been documented with anti tumorous and/or wellness properties as well. The traditional uses of Anamu are to stimulate immune function and immune cell production.

What medical researchers found to be possible precautions when using Anamu. Anamu contains a low concentration of coumarin, which has a blood-thinning effect. People with blood
disorders such as hemophilia should be monitored by their doctors closely for any possible side effects.  Further, individuals suffering from hypoglycemia should be monitored more closely by their doctors as well.

Synopsis of research from the rain-tree.com on Anamu (and its plant chemicals) reveals that it has wellness and has anti tumorous activities against several types of diseases. In an in vitro study by Italian researchers in 1990, water extracts and ethanol extracts of Anamu retarded the growth of leukemia cells and several other strains of tumor cells. Three years later, they reported Anamu was directly cytotoxic to leukemia and lymphoma but only inhibited the growth of breast based diseased cells.

In one study they reported: “Based on these findings we suggest that P. alliacea [anamu] upregulates anti-bacterial immune response by enhancing both Th1 function and the activity of NK cells.”

Other research suggests Anamu’s traditional use as a remedy for arthritis and rheumatism has been validated by documenting analgesic, antinociceptive, and anti-inflammatory properties. One research group in Sweden reported that Anamu possesses COX-1 inhibitory actions. Another research group in Brazil documented significant anti-inflammatory effects in rats using various models, and researchers in 2002 noted a significant analgesic effect in rats. The analgesic and anti-inflammatory effects were even verified when an ethanol extract was applied topically in rats, again validating traditional use. Many in vitro laboratory studies document that Anamu shows broad-spectrum antimicrobial properties against numerous strains of bacteria, mycobacteria, mycoplasma, viruses, fungi, and yeast. 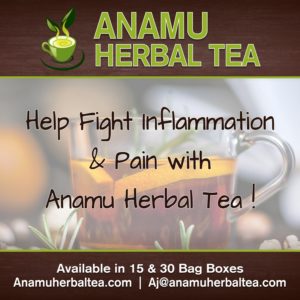 Do you have diabetes? Anamu Herbal Tea is a natural herb that tastes great and can benefit you too. Anamu has positive effects on levels of blood glucose, contributing to lower levels. Please use with caution and consult your medical provider, as it should not be combined with medication intended to reduce blood sugar. Please monitor your blood sugar closely.

Do you have Arthritis Issues? Anamu Herbal Tea is a natural herb that tastes great and can benefit you too.

Arthritis is defined as painful inflammation and stiffness in the joints. There are several types of Arthritis and you should seek the advice of your medical provider for diagnosis and treatment. Anamu has well known anti-inflammatory properties that help to reduce inflammation in the joints and can exert analgesic effects, acting as a pain reliever. In a small clinical study, conducted in 1991 and published in the Memorias do Instituto Oswalado Cruz, research was conducted on those with arthritis affecting the knees and hips. Individuals who participated in the study noted decreased pain in motion and decreased pain at night. For more information on this study, please visit http://www.scielo.br/scielo.php?script=sci_abstract&pid=S0074-02761991000600054&lng=en&nrm=iso&tlng=en for more information.

Anamu Herbal Tea contains a compound called dibenzyl trisulfide which has been shown to promote detoxification through urination. It aids the body with ridding itself of toxins that may otherwise become harmful to the body.

Anamu has been found to be an immunostimulant. It stimulates the immune system to increase its production of lymphocytes, or white blood cells. It has been traditionally used to aid in treating the common cold, influenza, respiratory infections and viruses by increasing the chemicals that fight infection. Immune System Increase with Anamu Herbal Tea